The Challenges of Raising a Blind Child

I am a real fan of the humorist, Wil Rogers. Among the many insightful things he said were his comments on Mother’s Day: “It’s a beautiful thought, but it’s somebody’s hurtin’ conscience that thought of the idea. Someone … figured we’ll give her a day … and then in return Momma gives you the other 364.” 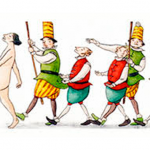 A number of years ago, I was asked by the friend of a friend to speak with a middle-aged man who was losing his vision but very much in denial. When I went to his home, he welcomed me cordially, invited me in, and offered me a soft drink. When he tried to pour it into a glass, however, three-fourths of it missed the glass and spilled on the rug. I learned later that his vision had deteriorated to the point that, when eating, he had to lower his face about three inches from his food to see what was on his plate.

Get updates by email